In the January 17, 1963 episode of Twilight Zone titled Valley of the Shadow, one of the stars of the show was a 1959 Impala convertible. Sadly, the car was wrecked… crashed into an invisible barrier. However, close examination of the captured video frames show the crashed car was not the same one that lead actor Ed Nelson had been driving around. The crashed car had the crossed flags emblem on the hood, indicating a 348ci engine, which the car he’d been driving did not have. We can only assume that the production company had sourced two ’59 Impala convertibles. One crashed car from a junk yard, and another good one to be driven around. 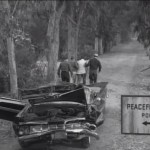 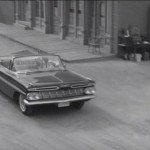 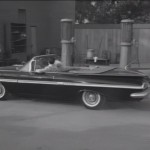 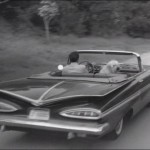